Our first full day in Egypt included tour to the most important sites in the Cairo area:  Memphis, city and capital of ancient Egypt and an important centre during much of Egyptian history. Memphis is located south of the Nile River delta, on the west bank of the river, and about 15 miles (24 km) south of modern Cairo. Closely associated with the ancient city’s site are the cemeteries, or necropolises, of Memphis, where the famous pyramids of Egypt are located. The Memphis archaeological zone was designated a UNESCO World Heritage site in 1979. Sakkara is best known for the Step Pyramid, the oldest known of Egypt’s 97 pyramids. It was built for King Djoser of the 3rd Dynasty by the architect and genius Imhotep, who designed it and its surrounding complex to be as grand as it was unique and revolutionary. Continue on to the Pyramids of Giza, one of the Seven Wonders of the Ancient World. Built during the Third and Fourth Dynasties, these monumental undertakings stand as a marvelous testimony to the almost unbelievable skill and determination of their builders. Enjoy an up-close view of the Great Pyramid, built for the Pharoah Cheops, as well as the Pyramids of Khefren and Mycerinus. Not far from the Pyramids, see the great Sphinx of Giza, the legendary chimeral statue that combines the head of king Khfren with a lion’s body

Visited the Egyptian Museum,   which houses the world’s largest collection of artifacts from the era of the pharaohs including some belonging to King Tut. Toured the Citadel of Salah El-Din with Alabaster Mosque, a medieval Islamic fortification. The location, on Mokattam hill near the center of Cairo, was once famous for its fresh breeze and grand views of the city. It is now a preserved historic site, with mosques and museums. Afterwards, enjoyed a tour of the colorful Khan El Khalili Bazaar district.

Transfered to Cairo airport for our flight to Luxor. Upon arrival in Luxor, visited the Denderah Temple, one of the best-preserved temple complexes in Egypt. Afterwards, transfered to the elegant Movenpick Royal Lily Nile Cruiser, for an amazing four night Nile cruise. After lunch on board, visited the Temples of Karnak and Luxor on the East Bank. Built over several centuries by Amenhopis III, Tutankhamun, Ramses II and Alexander the Great, Luxor Temple is a graceful piece of architecture preceded by an avenue of sphinxes. Afterwards proceeded to the Karnak Temples. In the New Kingdom, Amun-Ra was worshipped as the most important state god and the immense wealth of Thebes was spent embellishing and building temples in his honor.

Day 3 we visited the West Bank of the Nile: The Valley of the Kings where 62 pharaohs are entombed and the 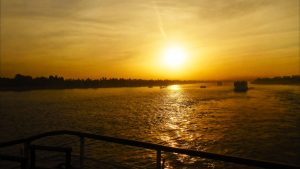 Valley of the Queens where royal wives and princes are buried and The Temple of Queen Hatshepsut. The second confirmed female Pharaoh of Egypt, Hatshepsut is generally thought of as one of the most successful rulers of Egypt.

Day 4 we visited the Horus Temple in Edfu, the largest and most completely preserved Pharaonic, albeit Greek-built, temple in Egypt. Construction began on this extraordinary temple in 237 BC and was completed nearly 200 years later. Dedicated to Horus, the falcon-headed son of Osiris who avenged his father’s murder by slaying his uncle Seth, the temple was built on the site where, according to legend, the two gods met in deadly combat. After returning to the ship for lunch, enjoy an afternoon tea as the ship sails to Kom Ombo. Upon arrival in Kom Ombo, to see the Ptolomaic Temple built for Horus the falcon god, and Sobek the crocodile god. The temple complex consists mainly of two temples running parallel with the traditional components of ancient Egyptian religious structures including a courtyard at the front of the complex, with halls following.

Visited the Aswan High Dam, the Temple of Philae & the unfinished Obelisk.The temple was almost lost to rising water in the 1960’s until the Aswan High Dam was built. Relax on board this afternoon and enjoy lunch and afternoon tea before a felucca tour on the Nile around Kitchener Island.